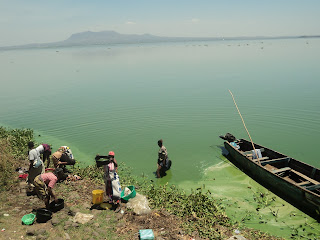 Water hyacinth was introduced to Africa over a century ago, but it did not become a problem in Lake Victoria until the early 1990s.
It covered substantial areas of the coastline, particularly in Uganda, blocking waterways, disrupting hydro-power, and decreasing the profitability of fishing.
Hyacinth also provided refugia for some species from the introduced Nile Perch. It largely disappeared from the Lake in the late 90s, perhaps, but not clearly, due to the introduction of a weevil used for biological control. It experienced a resurgence in the early 2000s.
Now following a wet year, which increased nutrient runoff into the lake in 2010, the spread of the weed has been tremendous covering the largest bit of the lake.
Currently, the lakes pollution has been worsened by the continuous rotting hyacinth that has made this water pathetic to the lakeside communities.
HomaBay residents stand out to be the most affected since they rely on the lake as the source of their daily income and for drinking water too. As per the current situation, the economic standard of this town has dropped by almost 35% as compared to 1992.
Posted by NDHIWA MAARIFA CENTRE at 5:45 AM

Email ThisBlogThis!Share to TwitterShare to FacebookShare to Pinterest
Labels: Homabay residents draw water from the choked.

NDHIWA MAARIFA CENTRE
Ndhiwa Town, Africa, Kenya
We are a community Maarifa (knowledge) centre established in Ndhiwa District as a collaboration of Arid Lands Information Network and the Institute for Rural Development-Kenya in the year 2007. The community here practice mixed farming as an act of adaptation towards climate change and distance from the lake. As much as the people here are adapting the use of new production technologies, there is still a great need for knowledge and skills of doing this, and that is how we come in.